When eternity breaks in on us

It’s impossible to live near L.A. as someone who writes every day, and not write something about Kobe Bryant this morning. You would have to be an alien who just landed on this planet to not know what went on 24 hours ago here and is dominating almost everyone’s mind. A helicopter crashed into the side of a mountain about two hours from here yesterday morning with L.A. Lakers basketball great Kobe Bryant, his daughter, Gianna, and seven others in it. No one survived. They were on their way to a basketball game in which Gianna was to play and Kobe was to coach. Gianna shared her father’s love for basketball and had aspirations of being a professional star like her father someday.

The title for an article about Kobe in the Daily Beast describes him well: “Kobe Bryant’s Brilliant, Flawed, Maddeningly Driven Genius.” To which you must add that he was also a dedicated husband and loving father. That’s why he was in that helicopter.

He was undoubtedly the most admired and loved sports figure in this city. The whole city is devastated. People have so shared in his career here that they feel like a piece of them died. Disbelief is the most common expression here. No one wants to believe it actually happened. Everyone was hoping they would wake up this morning and find out it was all a bad dream, but no. It wasn’t a dream. It was a living nightmare that reminds us all of the fragility of life.

How quickly life can be gone, whoever we are. No one is invincible. And when tragedies like this happen and capture the world’s attention – and believe me, this one did, because basketball now is probably second only to soccer in its global popularity – it is an incredible opening for the gospel. People are thinking, whether they like it or not, about what happens after this life. You can’t escape the questions. The questions are there, just under the surface, and asking them is merely bringing them from the subconscious to the conscious mind. And often the faith of the survivors comes forth in ways that attest to its strength and reality.

In an interview primarily to get Kobe’s reaction to LeBron James breaking his third most top scoring record in the NBA, Kobe said greatness wasn’t worth anything if you couldn’t share it. In his time as both an active basketball star and a retired one, Kobe Bryant shared much of himself and his wealth with the people of Los Angeles. “It’s crazy, watching this city and growing with it,” he said in that interview. “I feel such an appreciation. I can never pay the city back for what it’s given me.”

Pray that faith in Christ will be part of what his death shares with this city and the world. Let’s pray … 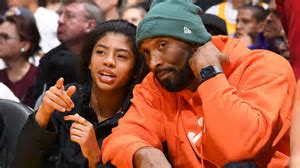 4 Responses to When eternity breaks in on us