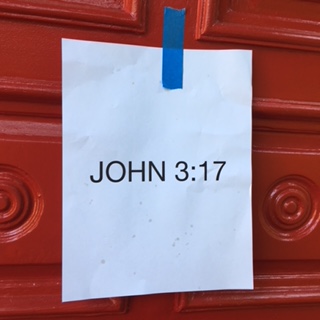 I’ve been thinking about starting a JOHN 3:17 campaign.

You’ve undoubtedly seen the self-styled JOHN 3:16 campaign — evangelicals’ most shopped-around logo. Go in your mind’s eye right now and see if you can spot that weird guy with the rainbow afro holding up a JOHN 3:16 sign from a seat where the center field camera, staring in at home plate for the next pitch, can’t avoid picking him up. Got it? See him there? One year he must have been there for the whole World Series. It really did get annoying.

Or how about Tim Tebow’s black eye patches with JOHN 3:16 emblazoned on them so that every close-up of his face was a photo-op for the verse that could save the world: “For God so loved the world that He gave His only begotten son, that whosoever believeth in Him should not perish but have everlasting life.” Didn’t you ever wonder how many people might have gone to their Bibles or the Internet to see what JOHN 3:16 was all about? Or didn’t you wonder if somebody actually got saved based on looking up this verse? It is the most complete statement of the gospel in all of the Bible, and all in one verse.

But the lesser-known companion verse, John 3:17, is equally important: “For God sent not His son into the world to condemn the world, but that the world through Him might be saved.” And given the current mood of the country, the judgmental reputation of Christians, and the tendency of people with toxic religious experiences to think that God is the great killjoy in the sky, who can’t wait to send us all to hell, this verse may be even more important than the former one. God did not send Jesus to judge the human race, but to save it. This is a much-needed loving statement of God’s grace. God loves us so much that in spite of His expectation of holiness, He provided a means by which He could save us instead of watching us perish in our sins.

What if we started plastering “JOHN 3:17” everywhere — see what kind of stir we could create?

Can’t you imagine some people going, “Hey, wait a minute. That doesn’t look right. Isn’t it supposed to be verse sixteen? John 3:16? That’s the way I learned it in Sunday school. Maybe it’s not a mistake. Maybe we should look it up.” Whoever does look it up is going to find a God of compassion, not a God who is mad at the world, and that’s the God we need for all time, but especially now, because that’s the God use have.

Why did God send Jesus? It’s all right here in verse seventeen. Because He loves us and made a way He could save us instead of judging us, by judging His own son in our place. 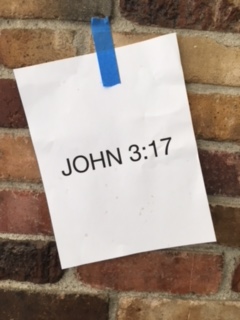