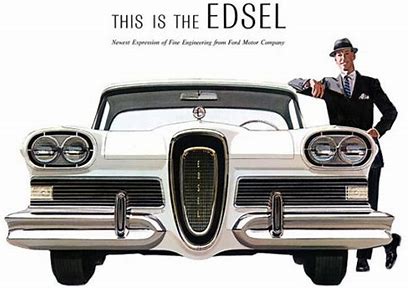 We left our story yesterday with the boys having lunch in the rain under dripping juniper bushes having just been to the showroom to see the new 1959 Edsels over which Ben is supremely disappointed. And it is at this time that the connection between Ben and the Edsel takes on new significance as Ben is convinced that the inevitable demise of the Edsel is going to spell the early demise of his young life. It’s something that the boys sense but never talk about; instead they throw their energies into somehow saving the Edsel from extinction, thinking that in so doing, they are in fact saving Ben.

That’s when Jonathan joins Ben in an all-out campaign to save the 1958 Edsel.

Soon they are way out of their league, writing letters to the Ford Motor Company and the mayor of Pasadena after they discover that he rode in his own 1958 Edsel in the 1959 Tournament of Roses Parade. The letter charms the mayor, and to their great surprise, the boys are invited to his office. Turns out Mayor Seth Wilson is a stockholder in the Ford Motor Company, and he informs the boys he intends to forward their letter to the right person in the company. He too is upset over the way things have gone with the Edsel and he even uses a story about the boys to counter the bad press he is getting in the Star-News over choosing to ride in a year-old car for a New Year’s parade. Mayor Wilson and Ben have each met their match. The mayor is so taken by Ben that he and his wife start attending the Colorado Avenue Standard Christian Church, thinking that if the pastor could turn out a boy like this, he must be onto something.

Meanwhile, on an ill-fated early Sunday morning newspaper delivery, Ben slams into the back of a parked Pontiac station wagon on his bike and sustains enough injuries to his face to send him to the hospital, and the dread the boys already felt deepens. Jonathan occupies himself with his paper route as Ben experiences a brief recovery followed by a setback which throws him back in the hospital. This is when, from his hospital bed, Ben engineers his final and most brilliant escapade to trip up his father’s sermon.

Knowing his father will be conducting a baptism that Sunday from the baptismal pool above the choir loft, Ben sends Jonathan to sneak into the baptismal room where Pastor Beamering keeps his chest-high rubber fishing waders so he can make a quick switch back into his suit to preach the sermon, and Jonathan has been instructed to poke a small hole in each boot. As a result, his waders fill up with water, and, unable to move because of the weight of the water, he delivers a most powerful impromptu sermon from the baptismal pool, revealing to the congregation that Ben is near death and extolling the qualities of Ben’s God-given stubbornness over all the right things.

Meanwhile Ben’s condition is worsening due to a severe case of endocarditis, an inflammation of the outer lining of the heart that, in 1958, for someone in Ben’s condition with a hole in his heart, was almost certainly fatal. Jonathan convinces his parents to allow him to stay all night in the hospital ,and in the middle of the night, with his mom and Ben’s parents asleep in the waiting room, Jonathan slips quietly into Ben’s room and climbs into his bed. Ben is expecting him. The dreaded moment has arrived, but Ben is ready. His arguments with God are over. The only thing he’s concerned about, noticing the clock reads 3:00, is to tell Jonathan that it’s time to get the news out. By the time Jonathan looks at the clock and points out to Ben that it’s three in the morning, not three in the afternoon, he looks back at Ben and he has left this world. And somehow, in those last hysterical moments of man and machine, Ben has slipped a note into Jonathan’s hand.

As I was writing this book, and the connection between Ben and the Edsel took on more and more significance, I soon realized Ben was going to have to die because the Edsel died. Indeed, this did not make me very happy — no happier than any reader eventually making the same conclusion. You become attached to a character, even in a story. The surprise, however, was discovering how in the writing of it, his death turned triumphant. Ben triumphs over death, he triumphs over his own rebellion, his struggle with God completely resolves so that he passes in perfect peace with no fear, and his only concern at the point of death is that Jonathan doesn’t forget about his paper route.

Ben went out with a bang. We should live with one.

2 Responses to Saving the Edsel