(Click here for a video of John reading this Catch.) 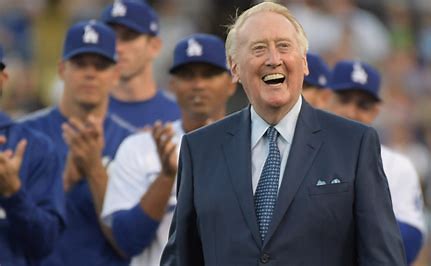 “Hi, everybody, and a very pleasant good evening to you wherever you may be. It’s time for Dodger baseball!” Anyone who’s had any connection to southern California knows that the lyrical voice behind those words would be none other than Vin Scully, voice of the Dodgers for 67 years. Scully has passed away at 94, and it seems all of Los Angeles is in mourning.

He was a man of impeccable timing and eloquence. When Kirk Gibson came off the bench, injured and limping to the plate to hit the game-winning home run in the 1988 World Series, Scully simply let the stadium resonate without saying anything for a long time as Gibson hobbled around the bases (you actually wondered if he could make it all the way around without help).  Then Scully finally said over the roar of the crowd, almost singing it, “In a year that has been so improbable, the impossible has happened.”

A devout Roman Catholic, Scully would give God credit for foul balls that would allow him time to finish the story he had begun at the start of someone’s at-bat. And you somehow believed it was true — that God actually cared about this. And why not?

I believe that God cares about a lot of things we never give Him credit for. My good friend Michael O’Connor has written a whole book around the fact that he believes God arranged certain events during the sixth game of the 1986 World Series to lead him to faith in Christ.

God is fully engaged in what is going on in the world, and in your life, for that matter, and mine. We need not despair or ever feel abandoned or alone. “I will never leave you nor forsake you” (Matthew 28:20).

“In his final home game, the players agreed on a plan, looking up to the broadcast booth before each at-bat and tipping their caps. It took an inning before Scully noticed and began waving back. The game ended fittingly.

“‘Swung on and a high drive to deep left field, the Dodger bench empties.’ Scully intoned as reserve infielder Charlie Culbertson hit the game-winner. ‘Would you believe a home run? And the Dodgers clinch the division and will celebrate on schedule.’

“Then he remained silent for a full minute.”

Now he is silent for good, but his voice lives on.

CORRECTION: I inadvertently gave Marti credit for yesterday’s Catch. I knew she had used the poem often in her own teaching and assumed the writing was hers without clearing it with her. That was originally the writing of our dear friend David Roper.

This entry was posted in Baseball and tagged Baseball. Bookmark the permalink.