What you think about what someone else thinks

(Click here for a video of John reading today’s Catch.) 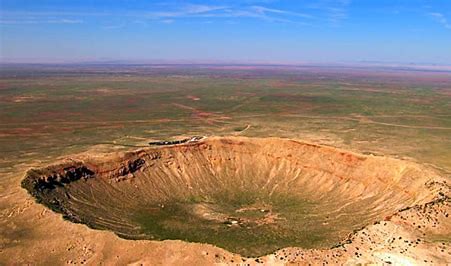 Chandler is all over aliens, meteorites, and UFO sightings, so you can understand how some of the sites we passed while driving through Arizona, Colorado and especially New Mexico might interest him. Roswell was not on our way driving to our destination in Colorado, but it might very well be on our way back. However, Meteor Crater was on our way — only 6 miles off the interstate — so we made the stop and enjoyed the comprehensive exhibit that has been created around this cataclysmic event thousands of years ago when a mass of iron and nickel estimated to be 150 feet across and weighing several hundred thousand tons slammed into the earth near where Winslow, Arizona is now traveling at 26,000 miles hour and hitting the ground with an explosive force greater than 20 million tons of TNT.

It created a big hole in the ground. Meteor Crater is the first proven and best-preserved impact site on Earth.

It was amazing to see all the exhibits and even touch an example of a small meteorite containing minerals that cannot be found on earth because they can only be created by pressures and heat we can’t even imagine.

All of this made for some fascinating conversation last night as we came closer to our destination in Pueblo, Colorado. Chandler’s understanding of God, humanity, religion and the universe is shaped in many ways by the theories he encounters on the internet and things we have shared from the Bible. But mostly he has an innate sense of spiritual things that I have learned to respect. My tendency to want him to see everything as I see it has been tempered with realizing that he has ideas that he feels as strongly about as I do about what I believe, and this is not a war of beliefs, but a sharing together of understanding that is in process for both of us.

And I have come to believe this is the best way to converse with anyone about the things of God, not that our goal is to get someone to think like we do, but to offer what we have come to believe about the truth while respecting what they believe and letting them weigh what we say in their own process of coming to the truth. We do not tell people what to think; we share what we think while respecting their right to their own beliefs. And we do this ultimately believing that the Holy Spirit is the one who will guide us all into all truth. If I didn’t know and believe that one thing, I would probably handle all of this very differently and with much anxiety.

This entry was posted in Sharing the gospel and tagged relationships, witnessing. Bookmark the permalink.

4 Responses to What you think about what someone else thinks